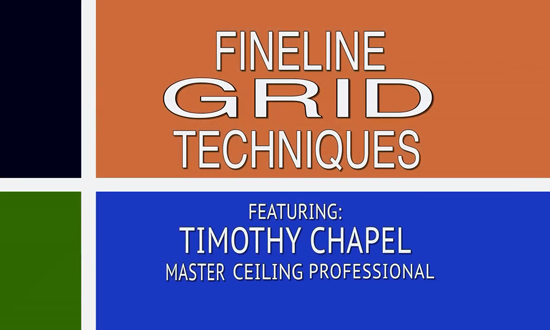 A drop ceiling is becoming a fundamental characteristic of modern residential basements and commercial interiors. Not only is it visually appealing, it has a practical use as well. You’re able to hide pipes, ductwork or even a sprinkler system with a suspended ceiling. The 9/16 inch suspension ceiling grid, also known as narrow or fineline grid is just one of several options available for your suspended ceiling needs.

9/16” suspended ceiling grid designs are a modern-looking upgrade from the traditional 15/16” standard width grid. The 9/16” suspended ceiling grid is available in a number of different style profiles and colors. View our Ceiling Grid PDFs and check out all the different types of narrow drop ceiling grid. One common profile choice, other than the Armstrong 7500,7501 SuprafineXL or Donn Centricitee DX24 9/16 inch standard flat face white grid, is the 9/16” bolt-slot grid system. This is also known as the Armstrong Silhouette or the USG Centricitee ceiling grid. (You will find the same style of product often has different names depending on the manufacturer you are referencing.) The bolt-slot suspended ceiling grid ceiling system changes the look of the ceiling in a number of ways. Bolt-slot grid features a narrow 1/4” or 1/8” slot in the grid which gives a sharp cut-in look and provides a very sleek, updated facade for showrooms, conference rooms, or banquet halls. You can use this slot to install hangers and hang objects from the grid system itself. Click on our Contractors Spec sheet to view other 9/16” grid profiles available.

With half the width of standard grid, 9/16” narrow drop ceiling grid can be a bit more difficult to install. Less material width creates a more flexible piece of metal which is sometimes difficult to work with in its early installation stage. Also, because there is less of the grid material for the ceiling tile to rest on, more precision in maintaining square is required. For this reason, most 9/16” fineline suspended ceiling grid systems are installed using a 2x2 ceiling grid pattern; however you can use a 2x4 ceiling grid pattern if desired. Refer to our video Fineline Grid Techniques on our How-To page to learn more about installing this narrow drop ceiling grid system.

The components used for a 9/16” width drop ceiling grid system are the same as those for the 15/16” standard grid system and include 12’ long main runners, 4’ cross-tees, 2’ cross-tees and 12’ wall angle pieces. 9/16" Narrow Suspended Ceiling Grid systems are available  from leading manufacturers, including Chicago Metallic, Armstrong, and USG. 9/16" narrow drop ceiling grid systems are available at most commercial acoustical supply stores.

If you don’t like the look of the traditional drop ceiling, you can gain a more modern look by using the 9/16” grid. The drop ceiling tiles for the 9/16” ceiling grid system are larger which helps improve the acoustical characteristics within the space. Refer to our free video on Ceiling Tile Performance Ratings on the Strictly Ceilings® How-To page, to learn more about the acoustical characteristics of different ceiling tiles.

It is important to note that because the 9/16” ceiling grid is narrower, you will not be able to install standard size ceiling tiles. You will need to purchase suspended ceiling tiles for 9/16” grid systems from commercial acoustical suppliers as they are not available at local home stores.

The 9/16” fineline ceiling grid system is typically manufactured out of a galvanized metal which helps to prevent rust. Many drop ceiling grid systems are partly made from recycled content, giving you more Leadership in Energy and Environmental Design (LEED) credits. A number of 9/16 inch ceiling systems are at least half recycled material. We encourage our customers to go green with us.

How Much Does A Narrow 9/16" Suspended Ceiling Grid System Cost?

With a much classier look, comes a bit more cost. The standard, flat-faced 9/16” narrow drop ceiling grid systems typically cost 30-40% more than the traditional 15/16” standard drop ceiling grid. Some profile styles can be considerably more expensive than that. Uninstalled grid for 9/16” ceiling grid will cost approximately $.85 - $1.50 per square foot and includes the grid material, wall angle, wires and fasteners. Prices will vary depending on the type of ceiling grid that you choose and the pattern you choose. Cost will also be determined by selecting either the 2x2 or 2x4 ceiling grid systems. You will also need to factor in the cost of the ceiling tile as well. Check out our Ceiling Tile Showroom to see many of the popular options available today!

You can save on your project by learning to install the drop ceiling grid and ceiling tile yourself!

*No Claim is made to the exclusive right to use “CEILINGS” apart from the mark as shown.
Products have been added to your cart CHECKOUT

Videos have been
added to your account Video Manager
Javascript is required to use and view this site for full functionality.